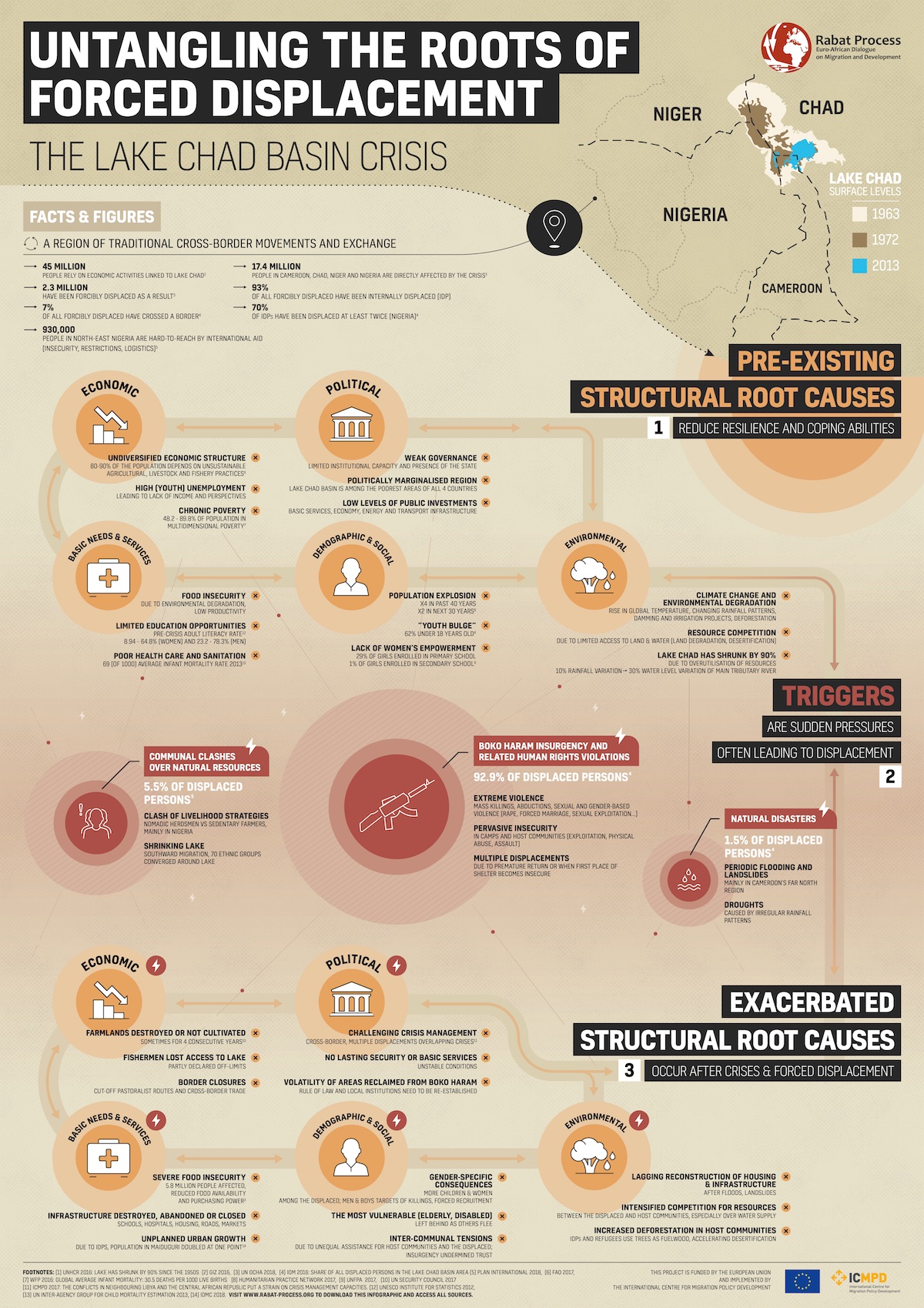 Forced displacement is a complex phenomenon that can be traced back to a multitude of interlinked root causes and triggers. The protracted humanitarian crisis unfolding in the Lake Chad Basin has led to one of today’s major forced displacement crises. Since 2013, it has already caused the displacement of over 2.3 million people - within and across state borders. The Boko Haram insurgency - one of the most well-known and major causes - is not the only responsible factor. This infographic by the Rabat Process Secretariat aims at untangling the complex root causes and triggers responsible for forced displacement in the Lake Chad Basin.

The shrinking of Lake Chad

Over 45 million people live in the Lake Chad Basin, which covers parts of Nigeria, Niger, Chad, and Cameroon. Their livelihoods are closely tied to Lake Chad, the main source of water for the fishermen, farmers and pastoralists of the area. They are all affected by the dramatic shrinking of the lake’s water surface since the 1950s, which has fiercely increased resource competition among local communities. The disappearance of 90% of the lake’s water surface, mainly related to overutilisation of resources and climate change, provides the backdrop for a multitude of additional, interconnected challenges the area has been facing for years.

The politically marginalised region is struck by chronic poverty, high youth unemployment and a general lack of livelihood opportunities. This can be attributed to a multitude of factors, including a lack of investments in economic development and public infrastructure, as well as rapid population growth. Severe food insecurity, illiteracy, lack of women’s empowerment and absence of health care are only some of the dire consequences.

The infographic, developed by the Rabat Process Secretariat, aims at identifying and untangling these interconnected structural root causes, in order to facilitate a better understanding of the situation, despite its complexity.

The infographic highlights selected facts for each of these structural root causes, without any claim to comprehensiveness.

Root causes reduce resilience and coping abilities of the population and often prepare the ground for the appearance of triggers of displacement. The already fragile and destabilised area has been hit by more than one such crisis in the past years. These so-called triggers or “sudden pressures” have caused mass displacements.

The complex relationship between root causes and triggers of forced displacement can create a vicious circle: Pre-existing structural root causes reduce the population’s resilience and coping abilities, making them particularly vulnerable to the impact of sudden crises, thus causing displacement. Once the immediate crisis is over, the displaced and/or returnees often face even more challenging living conditions, which can increase the likelihood of an outbreak of new triggers of displacement or their recurrence. Without addressing the structural root causes of forced displacements it is therefore challenging to offer durable solutions.

The Rabat Process Secretariat chose the Lake Chad Crisis as the object of this infographic, as it is currently one of Africa’s most dramatic humanitarian crises, which affects several Rabat Process partner countries directly or indirectly. With its focus on the root causes of forced displacement, the infographic is complementary to other activities of the dialogue, specifically focusing on the root causes of irregular migration. A Thematic Meeting on the Root Causes of Irregular Migration, based on an in-depth study on the topic, takes place in October 2018.

Both the Joint Valletta Action Plan (2015) and the Rabat Process’ Marrakesh Action Plan (2018) consider it a priority to address the root causes of forced displacement and irregular migration. They constitute the strategic framework of this infographic, which aims at increasing awareness and creating a shared understanding of the root causes of forced displacement that are at play in this particular humanitarian crisis.

This infographic has been developed by the Rabat Process Secretariat based on desk research and expert consultations. The Secretariat would like to thank the National Focal Points of Cameroun, Chad, Niger, Nigeria, as well as France and Senegal (co-chairs of the Thematic Meeting on Root Causes of Irregular Migration) for their contribution. In addition, the Secretariat thanks the European Commission (EC), the Food and Agricultural Organization (FAO), the International Catholic Migration Commission (ICMC), the Regional Mixed Migration Secretariat (RMMS), the Secretariat of the United Nations Convention to Combat Desertification (UNCCD) and the United Nations High Commissioner for Refugees (UNHCR)for their input.

Consult the sources to learn more about the Lake Chad Basin crisis:

1. The United Nations High-Commissioner for Refugees (UNHCR) and The World Bank Group (2016): Forced displacement by the Boko Haram Conflict in the Lake Chad region.

9. United Nations Population Fund - UNFPA (2017): From crisis to development around Lake Chad. Strategy for an integrated, holistic and sustainable response.

10. United Nations Security Council (2017): Report of the Secretary-General on the situation in the Lake Chad Basin region, 7 September 2017.

11. International Centre for Migration Policy Development - ICMPD (2017): Central African Republic at a Crossroads – Socio-economic Development Implications of Crisis-induced Returns to Cameroon and Chad and Libya - An Unending Crisis: Responses of Migrants, States and Organisations to the 2011 Libya Crisis.

All links last accessed in October 2018.